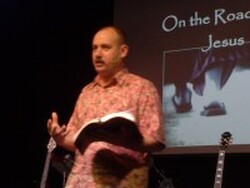 ​Would you buy a car from this man??
Hopefully, the answer is yes, since “this man,” former top-notch car salesman, is Sean Blount, the Senior pastor of Hope Point Live Oak.  Sean traveled a rather circuitous route to get to his full time ministry position.
He worked as a Military Police in the Air Force (where he met his wife, Wendy), owned his own landscaping company, and excelled as a car salesman at Larry Geweke Ford, making “6 figures.” This was all before he committed himself totally to the Lord and felt the call of God on his life to go into full time ministry.  In August of 2005, he sold his house, gave up his financially-comfortable lifestyle, and went to work at Hope Point Nazarene Church in Yuba City, eventually transitioning to Live Oak to be the Senior Pastor there.
When asked what one of his favorite verses is he was quick to say Proverbs 27:17.  “Iron sharpens iron, and one man sharpens another.” (NIV)  This points to Sean’s understanding of the need for community and connectedness in the body of Christ.  One of his favorite books is “Finishing Strong” by Steve Farrar, which points to his understanding of the need for being dedicated and committed to his wife and children and to living in purity.  He was asked to describe himself in three words.  His answer?  “At Jesus’ disposal.”
Being senior pastor isn’t all Sean does, though.  He  is the chaplain for the Yuba City Police Department, frequently riding along in squad cars.  In his free time (whenever that might be)(,) Sean is an avid chess player and  has recently started martial arts training, with the bruises to prove it!   He loves a good salsa, anything cinnamon, and is a fan of the $5.00 foot-longs at the Live Oak Subway.
Hope Point Live Oak is blessed to have such a leader, and, yes, I would definitely trust him to sell me a car.